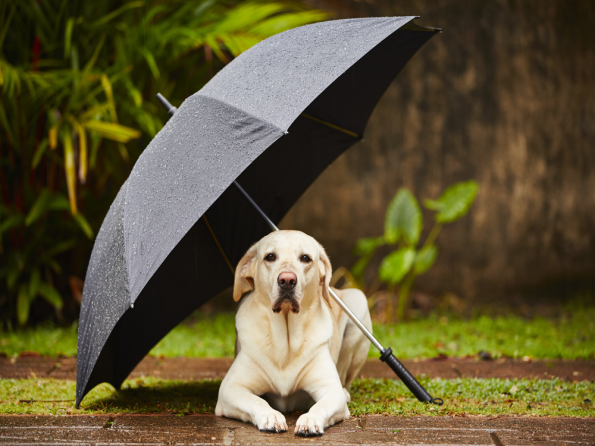 Summer thunderstorms can be exhilarating for people, but for dogs, they can be nothing short of terrifying. Veterinarians tell of dogs who have crashed through windows, gnawed on door handles, and wedged themselves into hiding places so tight that they got stuck—all in a desperate bid to escape the thunderclaps and lightning. To help soothe pets that are terrified of thunderstorms, here are five tips to share with pet owners:

Use a Thunder Jacket

Also known as anxiety wraps, thunder jackets are vest-like garments designed to calm anxious dogs by applying gentle pressure around a dog’s torso, much like the reassuring pressure of a calming hug.

Anxiety wraps were inspired by research into the calming effects of certain kinds of touch and pressure on humans with severe anxiety and autism. In fact, ThunderShirt (a big player in the animal anxiety wrap business) specifically calls out the work of livestock behavior expert and autism-awareness advocate Temple Grandin, who invented the “hug machine” to help calm people with autism. In the application of this methodology for pets, ThunderShirt brands its anxiety-wrap product as an effective calming solution for pets for thunder, fireworks, and separation anxiety.

Other companies promote their anxiety wraps as being effective for continual barking, whining, aggression, hyperactivity, destructive chewing, and other disruptive behaviors that dogs commonly display when terrified by thunderstorms. Testimonials by satisfied customers attest to their belief that thunder jackets are effective, yet there has been only one study to date that has scientifically examined the effectiveness of thunder jackets. Because of this, researchers caution pet owners that thunder jackets may not fully prevent or alleviate terror during thunderstorms and may have no effect at all.

Dogs with long or double coats easily build up static electricity, the same way people do when they wear a sweater and get a shock from touching a metal surface. New research out of Cummings School of Veterinary Medicine at Tufts University suggests that, in addition to the thunderclaps, dogs are frightened of the static electricity that builds up and discharges during thunderstorms. And that’s why pets will commonly run for refuge in bathtubs or behind the toilet tank, and in basements and other places that are grounded and protected from electric shock.

As a defense, pet owners can look for anti-static dog jackets or capes like Storm Defender that are designed to alleviate thunderstorm phobia by shielding pets against the static electricity that builds before and during thunderstorms.

Designed to lessen a dog’s anxiety or aggression during a high-stress situation, a calming cap is basically a single panel of sheer fabric that fits over a dog’s eyes to reduce visual stimuli while allowing the dog to easily navigate his surroundings. Originally created to ease the hyperactivity of dogs that became agitated while traveling by car, the calming cap has many useful applications to calm dogs in a wide variety of situations, from thunderstorms to trips to the veterinarian.

Try a Sedative or Anti-Anxiety Medication

In consultation with your veterinarian, you could try giving your pet a sedative to reduce anxiety during thunderstorms. To be effective, the sedative must be given, and be absorbed and actively working in the body, BEFORE the storm (and fear) starts. This is usually at least an hour prior to when the storm is anticipated to begin. A sedative may help your pet be less aware of the sights and sounds, and even sleep through the storm, calming your dog, indirectly reducing anxiety.

In contrast, anti-anxiety drugs directly reduce anxiety, but they may not calm a pet sufficiently. Certain antidepressants are useful when given on an ongoing basis (e.g., over the thunderstorm season) to try to prevent or reduce the fear related to thunderstorms. With antidepressants, a short-acting drug (such as a sedative) may be added on the day of the storm if needed. Other possibilities that may be used in conjunction with anti-anxiety medication or sedative include dog appeasing pheromones (Adaptil®) and natural products such as melatonin. Although a pharmaceutical approach may be useful in some cases, the medications should only be given under veterinary supervision.

Several studies have shown that music can help calm dogs. In a 2002 study on the influence of auditory stimulation on the behavior of dogs housed in a rescue shelter, researchers found that dogs spent more time resting and less time standing when classical music was played. Similarly, in a 2012 study involving dogs that were kenneled, researchers found that dogs spent more time sleeping and less time vocalizing when listening to classical music. If you don’t happen to have any classical music, search “soothing music for dogs” on YouTube and you’ll find a wide selection of music, with some compilations lasting 8-15 hours. You can also search “dog music” on Spotify and find a whole range of choices, from relaxing piano music to the sounds of crickets and other nighttime ambiances.

This may be a difficult one to resist because when a pet is in distress, our first instinct as a pet parent is to soothe them and reassure them that everything is okay. And this is fine to a degree. However, in your pet’s mind, excessive coddling may serve to justify the fear – and make it worse. The coddling may even be seen as a reward, and by inadvertently “rewarding” the fear, make the fear response more intense with each storm! Coddling also doesn’t teach your pet not be afraid of thunderstorms. Instead, it may condition your pet to seek attention as a coping strategy, leaving your pet even more vulnerable any time you are not there, by their side, during a storm.

There are other things you can try as well, such as turning up the radio or television (increasing background noise) or placing your pet in a well-curtained or windowless area, but key in all of this is not to ignore the problem. Your pet does not need to be terrified time and time again and even hurt in a moment of panic. There are ways to comfort pets who are terrified of thunderstorms. Consult your veterinarian to help you choose the best possible options. Keep your pet happy and healthy – every day – even when there are thunderstorms!